No large, BRI-type strategic project has materialized so far in Romania, but many con-men with political connections tried to exploit the wave of enthusiasm for “Chinese investments” created after 2012. Today, ten years later, the backlash against Beijing’s economic influence is visible. The few onest business which function are small or medium-sized, operate in nonstrategic sectors and prefer to stay under the radar of international reports.

EFOR brings you an X-ray of the real, not hypothetical, presence of China in Romania.

There are currently 31 agreements in force concerning twinning and other forms of cooperation between municipalities/counties in Romania and China, according to an official 2022 response from the Romanian Ministry of
Development, Public Works and Administration (MDLPA). In total, the Ministry has issued 65 opinions on such applications.

Over the years, many Chinese delegations have visited Romania, most of them with a cultural or economic agenda, but without notable results. For instance, delegations of the Chinese People’s Association for Friendship
with Foreign Countries (CPAFFC), one of China’s main bodies dealing with fostering bilateral through local diplomacy, made several visits to Romania, on which occasion it met with high-ranking Romanian officials from the Ministry of Foreign Affairs, the Ministry of Economy, as well as with local elected officials and undertook visits to several town halls and public institutions.

There are three main sources of Chinese information in Romania, in Romanian and English: state agency Xinhua, China Radio International Romania (CRI Romania) and the Chinese Embassy in Bucharest. CRI has for many years employed a Romanian journalist – Dan Tomozei, who had lived for a long time in China and became a mouthpiece of the regime, reporting exclusively in superlative terms on China.

A check of 200 news agencies registered with the Romanian Bureau of Audience Transmedia (BRAT) did not reveal any publication in Romania owned by the People’s Republic of China (PRC) or by the Chinese Communist Party (CCP). There is, however, one news agency with links to the PRC, namely HUA YANG MEDIA GROUP SRL, which runs several newspapers but does not appear to have any circulation at the moment. There is also a company called CHINA TOWN MEDIAX SRL established in 2012 with Chinese ownership, which also does not appear to be active.

In 2022, China overtook Poland to become Romania’s 4th largest import partner country, but fell to 20th place in the top export partner countries. Below, we can see how the trade flows between the two countries evolved from 2017 to 2021 (UN COMTRADE database): 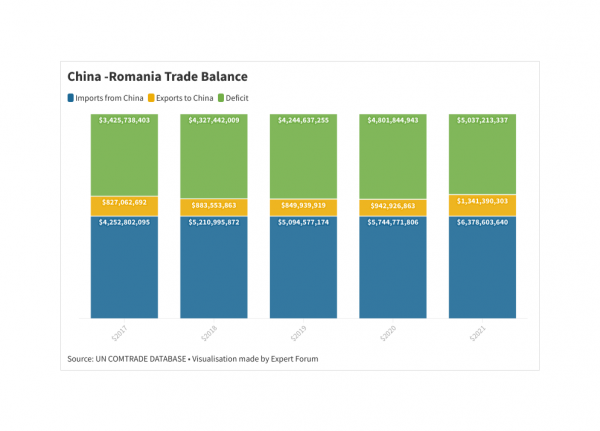 The picture isn’t brighter on the Chinese investments. According to data from the National Bank of Romania (BNR) on foreign direct investment, in 2020, the stock of Chinese FDI in Romania was 1110 million euros, which is equivalent to 1.2% of the total foreign direct investment in Romania. Of this, 668 million euros were made in greenfield investments. This value was calculated based on the ultimate investing country, which was a different methodology than in previous years. 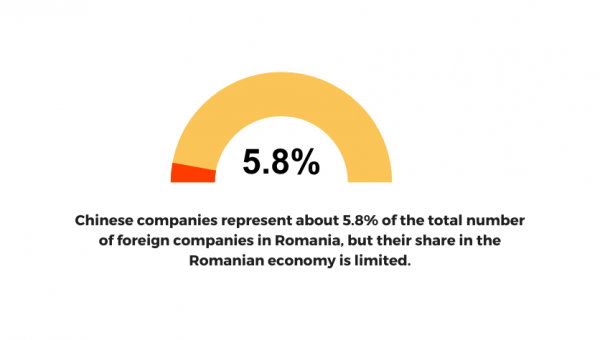 DUBIOUS BUSINESS UNDER THE RADER

The largest Chinese diaspora community in Romania is located in Bucharest, in Sector 2, in the vicinity of the notorious Dragonul Roșu shopping centre. The complex covers an area of 80,000 square metres and includes more than 5,500 shops, restaurants and about 3,500 square metres of office space. It is estimated that the share of Chinese nationals who are traders and businessmen in the complex is about 30% (from 100% in the beginning), and the share of Chinese goods is around 60-70%.

The shopping complex is operated by Dragonul Roșu SA, a company established in 2003. The company is part of the NIRO Group, owned by the Romanian businessman Nicolae Dumitru (aka Niro), who was sentenced to prison in 2016 for traffic of influence. The CEO of NIRO Group is Vasile Gabriel Niță, former Secretary of State in the Romanian Ministry of Interior. The media has reported extensively about Niro and the managers in his group as having worked in – or being affiliated with – the former Communist
secret service, the Securitate.

Political and economic ties between Romania and China are at their lowest in three decades. Politically, the war in Ukraine has raised concerns about a possible wider alliance between China and Russia in the future. By choosing to openly support Russia’s narrative on Europe and NATO, China has emerged as a relevant player in the European geopolitical and security landscape, and Romania, while traditionally not critical of China, will not be able to ignore this.

THE REPORT IS AVAILABLE HERE