The EU spends millions of Euro to make its institutions and symbols better known, recognizable – and, maybe, just maybe, a little loved, please? From information programs to organized tours, from websites to visual propaganda, no (awkward) effort was spared to instill into the European citizenry a sense of belonging and create a modicum of emotional attachment to this marvellous political entity which has brought prosperity and peace to the continent. And still, until now, for the general public the EU has remained largely the butt of jokes: just mention Brussels and people, rightfully or not, start rolling their eyes at the thought of arcane bureaucracies and impenetrable jargon. 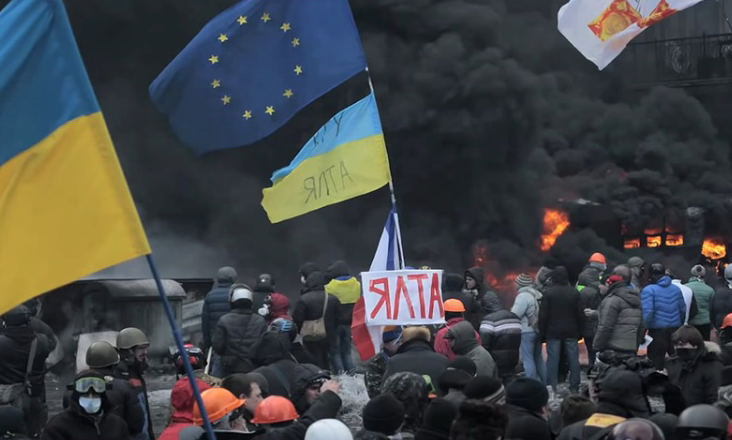 But now, for the first time in history, in a corner of Europe large crowds of, yes, ordinary people spontaneously put their lives on the line – literally – for freedom and the EU, under the blue flag with golden stars. To them, in these moments, this flag is not the symbol of the obscure banana-shape regulator; it is the symbol of freedom, which too many of the pampered citizens of the continent, including their rulers, have come to take for granted. Dozens have died already on Kiev’s barricades under the banner; these are not only Western Ukrainians, but Easterners and Southerners too. How do you feel about it, dear leaders?

Nobody says the situation in Ukraine is simple or an easy way out of the current quagmire is around the corner. Nobody is asking Brussels to form battalions of volunteers and intervene to defend its unexpected new converts. But you, dear EU leaders, can at least try for a moment to shed the air of embarrassment that someone has really fallen in love with you and the values you are supposed to stand for. Take a break from writing communiques and non-papers, bow in respect and mark the day in your thick agendas: from this day on, the EU flag is legitimized by blood and valor. From this day on, it lives.