This report analyzes the data declared by electoral competitors to the Permanent Electoral Authority (PEA) which has been published on the online platform www.finantarepartide.ro by September 18. For a more general analysis of the legislative framework and the issues related to the financing of the electoral campaign, please read the first monitoring report published at the beginning of September.

* note. according to the database published on October 1, competitors declared 185 million lei. The current report reflects the total of 145 million lei. An update will be available soon.

EFOR has gathered all the information related to the electoral campaign and developed a database that will be updated as the Permanent Electoral Authority publishes new data. You can access the database and the related statistics on www.expertforum.ro/finantari-partide/contributii-campanie.html

In addition to the first report, EFOR has identified the costs for the precampaign – the period that ended on August 27 – for the Save Romania Union. The other parliamentary parties to which we had sent requests for information have not responded yet. Pro Romania spent 776.612,29 lei from subsidies for outdoor/street promotion (billboards) and LED screens in several counties (July-August), while USR spent 1.613.823,45 lei at the central structure level. The expenditure is distributed as it follows (in RON):

On September 18, the Permanent Electoral Authority reported contributions from the competitors worth of 125.238.229,33 lei, out of which 3.086.207,26 lei came from independent candidates. According to own calculations, after analyzing the database, the total amount, including the candidates’ contributions and transfers, would be about 122 million lei, considering that some entries are doubled.

The total amount shows that the funding in 2020 will be higher than in 2016, despite the possible obstacles related to COVID-19 regarding the collection of donations or membership fees. The expenditure may not exceed the electoral contributions. Parties are still able to submit contributions until September 26. No expenditure data has been published so far.

Up to this moment, there are around 16200 unique names in the database which include candidates for all the public functions. In total, in Romania there have been over 256 thousands applications. For the candidates’ lists, any candidate may submit up to the upper limit of contributions. Given the problematic quality of the database, it is difficult to estimate whether there are constituencies where no contributions have been declared at all. 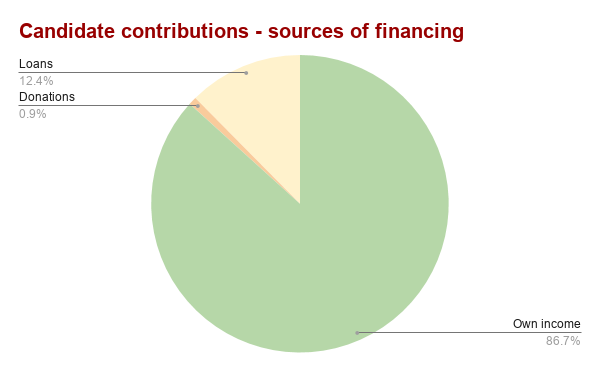 In addition to the candidates’ contributions, political parties can transfer money from private funds raised outside the election campaign as well as from subsidies, according to a last minute legislative amendment, introduced by Law 135/2020. Unlike for the Presidential or the elections for the EU parliament, party contributions are relatively limited in the local elections. Until September 18, parties transferred 4,5 million lei from the current central accounts to the central campaign accounts and 1,6 million lei from the central subsidy account to the central subsidy account for the campaign. Moreover, ALDE has allocated 3,9 million lei from the subsidies account to local and county/Bucharest branches. 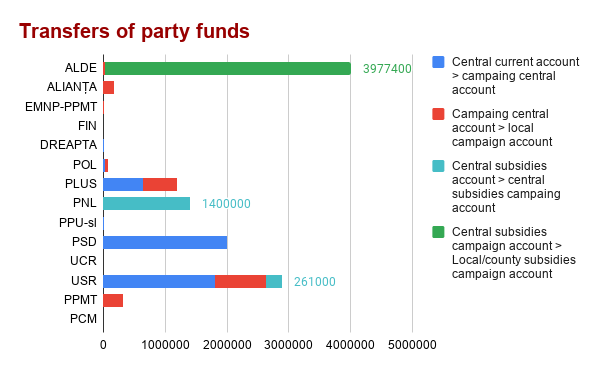 PNL declared the biggest amount of money so far, closely followed by PSD (almost 30%). The independents have declared 2,9% of all contributions according to the Permanent Electoral Authority database. 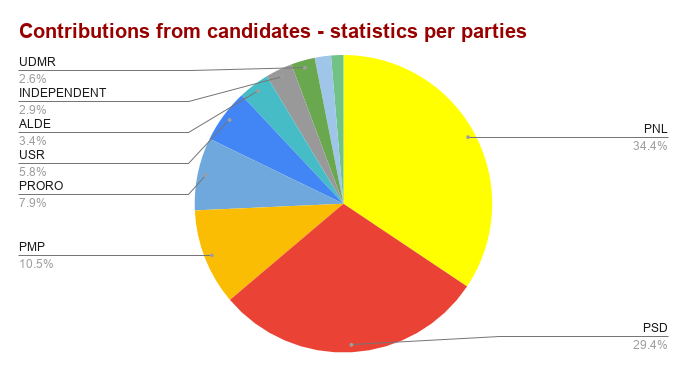 Constanta county registers the highest declared contributions, accounting for almost 5% of the total funds, followed by Cluj, where 3,6% of the funds were declared, without taking into account the contributions of the political parties. Next in line are Prahova, Bucharest (without sectors) and Arges. The counties with the lowest contributions are Covasna and Harghita, but also Giurgiu where there have been less than 1% of the total funds declared so far by the electoral competitors. 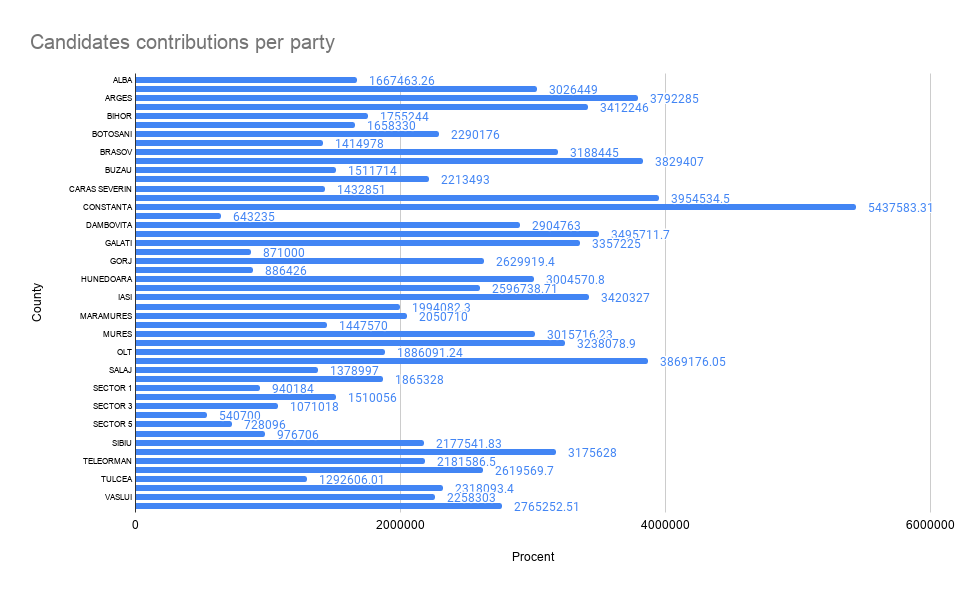 The candidates for mayoral positions were the most important contributors, registering almost half of the declared money. This is explained by the stake of the position, but also by the fact that for the lists of local councilors the thresholds are relatively small. However, the contributions for general mayors and county council presidents remain the most significant. Thus, nine candidates have reached the maximum contribution threshold, namely 446.000 lei. 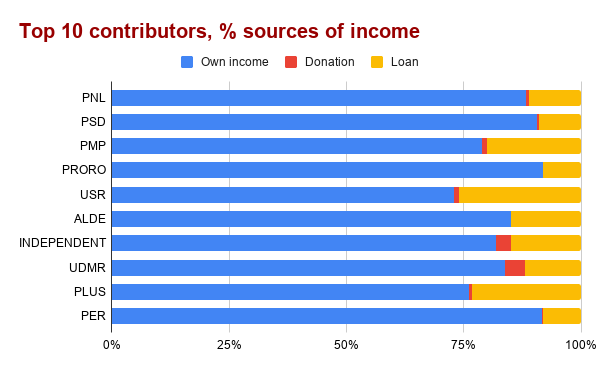 As far as the county councils are concerned, only ten parties have reached the highest value that can be reported and used in the campaign, namely 223.000 lei.

The strategies adopted by political parties to secure funding for the candidates on the lists were different. If in some cases contributions were divided among the members of the list, in others only one person declared the full contribution. For instance, on the lists for local city councils there are three cases in which the amount of 66.900 lei was covered by a single candidate:

At the General City Hall, nine competitors declared contributions. Candidates from the Social Democrat Party or the Popular Movement Party did not declare any money, and the parties did not report transfers from their own funds to the Bucharest branch, according to data published by the Permanent Electoral Authority. The biggest contribution was declared by Ioan Sirbu, candidate for Pro Romania (almost 50% of the total funds declared for the General City Hall).

By analyzing a series of assets declarations we noticed that some of the candidates could have difficulties in justifying how they have contributed with funds from their own income or their contributions almost equal their annual income. Some examples:

Other candidates have resorted to loans, and some of them finance their campaign exclusively from this type of contribution. PNL declared most loans (65), followed by USR (50), PSD (37) and PMP (22). Pro Romania candidates have taken 17 loans and those of PLUS a number of 16. The competitors who have declared the largest loans (from individuals or credit institutions) can be found in the report.

Report published within a project funded by the Bureau of International Narcotics and Law Enforcement Affairs (INL), implemented by Expert Forum in partnership with CEELI Institute and the International Foundation for Electoral Systems (IFES).