In 2020, the media market was fed with funds from the Government, to promote the anti-Covid campaign. The period in which almost 200 million lei (40 mil EUR) were promised overlaps over the electoral period, i.e. over the local elections of September 27 and the parliamentary elections at the beginning of December. Campaign allocations and implementation procedures have been publicly criticized, while some of the providers have not received all their money so far. Although the figures (reach) seem to show performance, the criticisms brought in terms of allocation criteria, the presence on the list of beneficiaries with significant amounts of money of highly politicized suppliers, as well as its implementation in a year with local and parliamentary elections, show that it has a clientelistic and electoral character. Although the need for an information campaign is obvious and absolutely necessary given the situation in 2020, at the same time funding significant amounts of television or websites that have promoted in the same time fake news is immoral and strengthens the electoral nature of the allocation of funds. The government and the National Liberal Party have partially secured their visibility in 2020 by publicly funding the media. It is obvious that such a beneficiary, who receives significant funds from the Government, becomes vulnerable from the perspective of journalistic independence. Moreover, such funds have provided for electoral advantages of a political competitor, in spite of international standards on fair competition.

At the same time, advertising or event organization services have not completely disappeared from the local level either. Municipalities, county councils or municipal companies in Bucharest and in the country used public money to promote themselves electorally. It is obvious that the municipalities did not organized as many events as they would have staged in a normal year – and electoral on top of that.

However, the contracts made by the municipal companies in Bucharest, but also by some municipalities (see Mangalia) or county councils (see Ialomița) in the country point to the electoral potential of the money spent. The lack of transparency of the Municipal Advertising and Display Company, which received several contracts in Bucharest, the details of which it refuses to make public, raises questions about spending public money in the middle of the election year, but also with a pandemic. And the activity of the Sector 1 Municipality in Bucharest (distribution of the mayor’s office magazine on the first day of the campaign) illustrates the spending of advertising funds with an obvious electoral character. Some of the mayoral candidates used public resources for themselves and the party to increase voter visibility. Of course, the behavior is not new and we can see that it is repetitive in the election years.

One of the major problems, however, remains the lack of intervention on the abuse of public resources, especially when it is obvious. Although in 2020 some of the electoral commissions acted regarding the abuse of public resources, we believe that such actions must be controlled and sanctioned by the Permanent Electoral Authority when it comes to funding political parties and election campaigns in a timely manner. The Court of Auditors’ audits may also indicate unjustified expenditure and impose appropriate sanctions.

Read the report (Romanian only).

Commitments and payments, based on FOIA and other public information 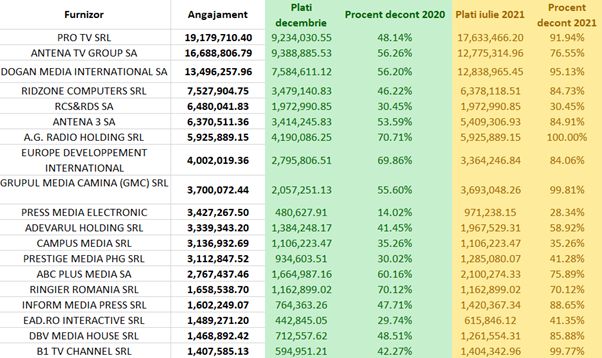 Event organized within a project funded by the Bureau of International Narcotics and Law Enforcement Affairs (INL), implemented by the Expert Forum in partnership with CEELI Institute (Czech Republic) and the International Foundation for Electoral Systems (IFES).