This report examines party funding in a difficult election year that finally proved generous with political parties. We analyzed various sources related to the income and expenditure reports of parties and donors, to identify the main developments, but also to see who are contributors to party income and whether their own income allows them to be generous. Even if it is an election year and probably many of them have recovered their investments from reimbursements, after elections or by occupying elective positions or political appointments, we analyze the extent to which the money reported by parties is also found in donor assets declarations. We also note the quality and uniformity of the data, compliance with the regulations for publication and conclude with a series of general conclusions and recommendations. We will focus mainly on the parliamentary parties, which collected and spent the largest sums.

Read Policy brief no.118. All data is also available on www.banipartide.ro.

Data from party reports show that party revenues did not decline in 2020, in a pandemic context. On the contrary, last election year was a rich one. Moreover, the parties received 253 million lei from subsidies, the highest value in the history of public political funding in Romania, although at the beginning of the year they should have received only 181 million, according to the state budget provisions. There is an increase in membership fees, donations or loans, especially in the case of large parties, with a chance to enter parliament or join the ruling coalition. And the costs for election campaigns have risen significantly.

Only 32 parties published the mandatory data in the Official Gazette until the date of publication of this report, out of 189 parties (ie 17%). We consider it important that non-compliant parties be sanctioned, especially since some seem to have been breaking the rules for years. Moreover, where there are sanctions, it seems that there is a practice of applying warnings, even if the parties relapse. For example, the Romanian Ecological Party, which had more than 600 candidates in the 2020 parliamentary elections, a number similar to that of the big parties, did not submit this information; PEA notes a similar behavior in the report for 2019. The table below illustrates the data existing on May 21, 2021 (updated 27.05) on the PEA platform. www.finantarepartide.ro. 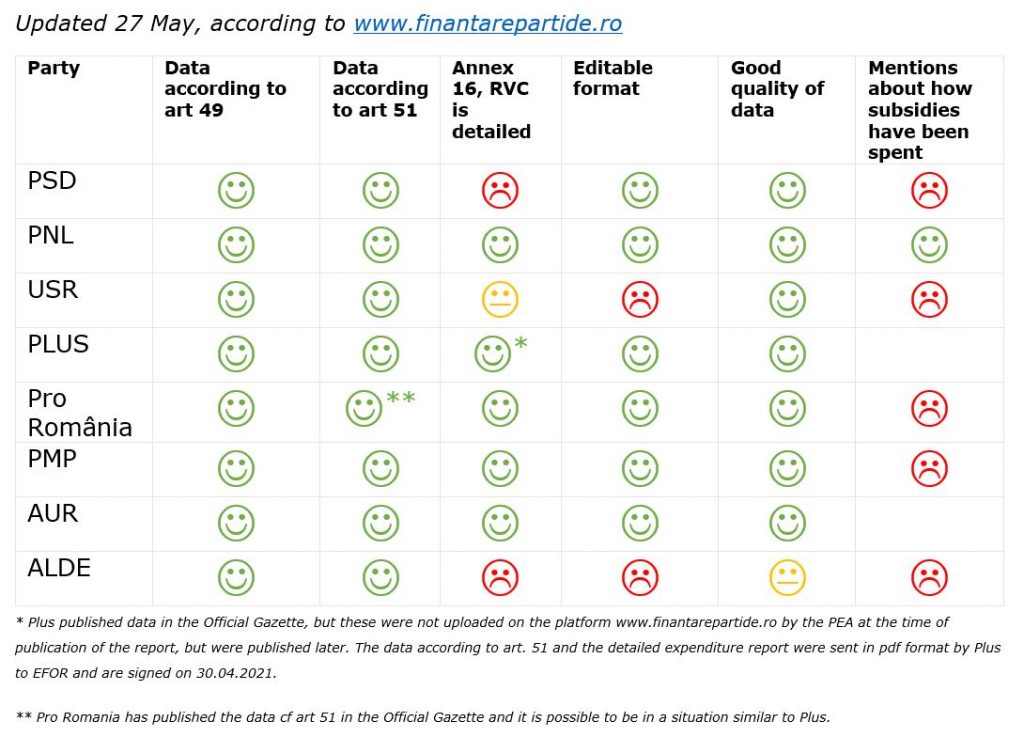 We did not evaluate the subsidies for AUR, as they started to receive funds in 2021, and Plus received only from the end of 2020.

After analyzing these data we found that the PEA developed portal www.finantarepartide.ro was not updated properly, as the documents related to several parties were not updated several weeks after the reports were submitted by the parties. EFOR’s recommendation is that the data be published on the platform in a shorter time, especially as the law on the financing of political parties stipulates that the PEA must publish on its website the annual income and expenditure reports, the annual financial statements and summaries within 5 days from the date of their submission.

The quality of the data is not uniform and the format of the income and expenditure reports (Annex 16) differs from one party to another. Although data has begun to be published in an editable format in recent years, the discipline of some parties and the mechanisms for collecting data can be significantly improved. Each party seems to interpret differently what a detailed report means (the same goes for the election campaign), even if it should publish in detail every amount received and every expense incurred. Moreover, it is not clear whether the reports should include (and include) campaign expenses or only party expenses, given the wording of the law, as well as the fact that specific reports are prepared for campaigns. The different structure of the reports makes it difficult for an observer to follow in parallel the campaign funding and the financing of the party, as the information is marked differently only in some reports.

PNL, PMP, Plus, Pro Romania and AUR published detailed data, according to the Implementing Rules of Law 334/2006 regarding Annex 16. PSD published a centralized form of income and expenditure report (RVC), which includes only the general amounts by counties for membership fees, donations, subsidies and other income (art. 16). USR has published a centralized format, and the data is not accessible in editable format.

Membership fees payments show that a small number of people have performed their membership responsibilities according to the statute. As a rule, parties may impose different thresholds, depending on the position or occupation of the member. But in cases where the analysis was possible, it can be seen that the parties are not efficient in raising these funds, as the number of people who paid is relatively small. For PNL we identified almost 12,000 unique member names, at AUR 1077, and at PMP 2570 people. We remind you that the parties do not publish the number of members.

The transparency of the expenses from subsidies has increased, as the PEA requested the parties starting with 2021 to publish the categories of funds on which they spend the money. However, in the annual income and expenditure reports it is not possible to see how the money is spent, the only exception in 2020 being the PNL report, which specifically marked the source of the money. The data show that PNL spent 53 million lei on subsidies in the central level, of which almost 60% on advertising. Given the significant amounts and the fact that part of the money goes back to party companies, we need to have a discussion about increasing transparency for spending large sums of money.

The profile of donors is very different, from parliamentary advisers, business owners, journalists, employees of municipal companies in Bucharest, advisers in public institutions, members of boards of directors. The analysis of the names of donors, members who have contributed or individuals and legal entities that have granted significant loans shows that in some cases there are potential inconsistencies between income and amounts directed to the party. EFOR checked hundreds of assets  and interest declarations where they were available, and we noticed that some of the subjects did not seem to have sufficient resources to justify these contributions. We have identified people who earn ten times less each year than they paid to the party. Even if money can be recovered from reimbursements after the elections, people who borrow or donate to the party should still have the resources to direct the money. We have identified such situations in the case of donors or people who have borrowed PSD, Pro Romania, AUR or PNL. At Pro Romania most loans were registered on December 2 and 3, just 2 days before the end of the election campaign.

As we do not conduct criminal investigations, but only interpret public data, we believe that this issue should be given more attention by the institutions with oversight functions. There are indications that parties use the practice of directing funds to “buy” a place on the list or to secure a person’s candidacy. This is not illegal, but it has negative effects that distort the political market. We can also see that some of these donations or loans are a potential way to enter the grace of the party, if it manages to come to power.

We reiterate that in 2019 and 2020, the pre-campaign was much more visible than the campaign, but the amounts spent are not subject to the same rigors of transparency. The analysis of income and expenditure reports does not help us better understand how this money was spent.

Political parties do not publish any information on their websites related to income and expenditure. As a good practice, USR publishes, starting in 2021, the expenses of the General Secretariat on https://transparentasg.usr.ro. USR Bucharest publishes information on payments on https://usr-bucuresti.ro/cheltuieli.

Last but not least, the legislation needs to be revised in order to eliminate unclear interpretations and to consolidate those aspects that are not regulated with regard to current funding and the campaign. We reiterate that there are several GRECO and ODIHR recommendations that have not been implemented. For example, recommendations should be implemented to reduce the thresholds for bank payments for donations and contributions from the current equivalent of ten salaries. The current legislation does not refer to the participation of third parties in the financing of the political party or electoral campaigns. The penalties should be increased and better enforced. Moreover, we believe that the PEA needs to strengthen its monitoring and control capacity both for the current activity and for the election campaign.

For recommendations related to election campaigns please see the monitoring reports of the 2020 elections, available at www.banipartide.ro/rapoarte.

Report carried out within a project funded by the Bureau of International Narcotics and Law Enforcement Affairs (INL), implemented by the Expert Forum in partnership with CEELI Institute (Czech Republic) and the International Foundation for Electoral Systems (IFES).

Event organized within a project funded by the Bureau of International Narcotics and Law Enforcement Affairs (INL), implemented by the Expert Forum in partnership with CEELI Institute (Czech Republic) and the International Foundation for Electoral Systems (IFES).