The report shows how Romania pays some of the most substantial national subsidies to political parties in the UE –37 million EUR in 2018 – and questions the rules that should be used to ensure transparency when spending the money.

The 2018 amendments led to a significant increase in the amounts allocated to parties, up to a total of approximately € 37 million . The chart below shows how subsidies allocated in 2018 have increased more than 20 times over the last decade, well above the inflation rate or the GDP growth.

In the European Union, the rules for allocating subsidies to parties and the annual amount they can reach differ widely from country to country. The fact is that in most cases the total amount, presented in the chart below, is less than EUR 37 million per year, as it is in Romania. The poorest countries in the EU – Bulgaria and Romania – are in the top! 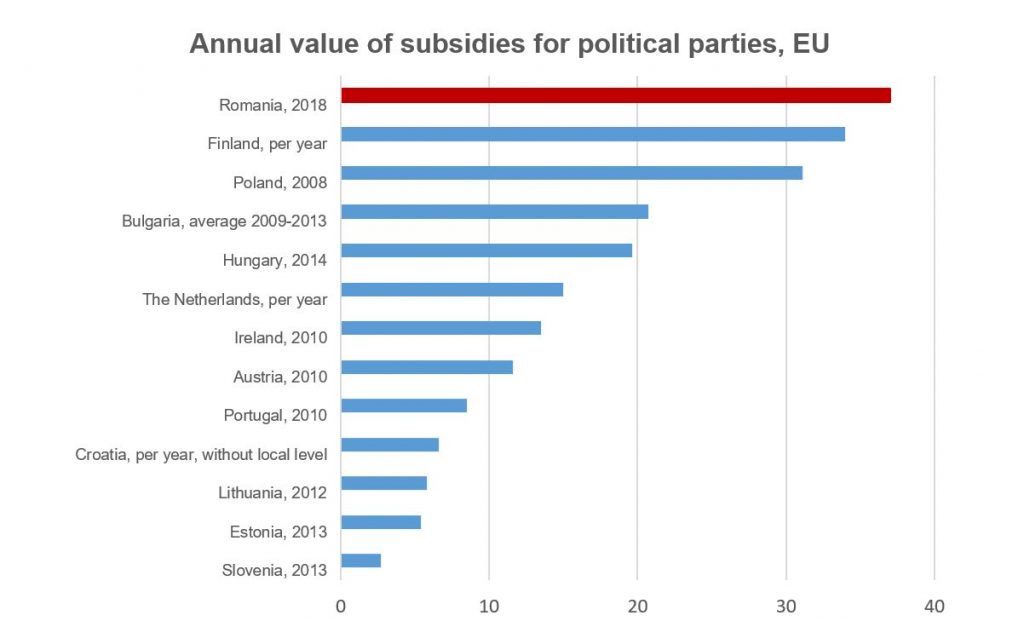 To calculate the maximum total amount of subsidies for parties for this financial year, we must refer to the GDP which is estimated for 2019 at 1.022 billion RON. Thus, the maximum level that these subsidies could theoretically reach is over 400 million RON (approx. 85 mil. EUR). Although the initial proposal was close to this figure, the final version of the national budget allocated 269 mil. RON for subsidies (around 57 mil EUR).

The law is not clear about what happens to the unspent funds at the end of the year. It is unclear whether the unspent amounts of subsidy remain in the accounts of the party at the end of the fiscal year or if it must be returned to the state budget. If the party keeps the money – it is not clear whether or not they should be deducted from the next year’s sum. In other words, the party can put aside funds in non-election years when spending is lower and use these sums in the electoral years.

Regarding the destination of uncommitted funds at the end of the year, there are different legal alternatives. For example, financial aid for religious cults is refunded if the expenses are not justified by December 31st of each year. For public administration, the local finance law cancels budgetary credits that are not spent by the end of the year. The municipal budget surplus is transferred to the next year’s budget, but the conditions of use are rather restrictive. It is not clear why political parties enjoy a more favourable regime than other public or semi-public entities.

The continuous accumulation of funds – if the budget does not close without a surplus of money at least at the end of a four-year electoral cycle, if not annually – can divert the scope of the subsidy for political activity and breaks the party’s relationship with the audience, thus overturning the logic of the subsidy which, at least in its essence, is correct.

Given that the funds allocated increased exponentially, EFOR considers that: