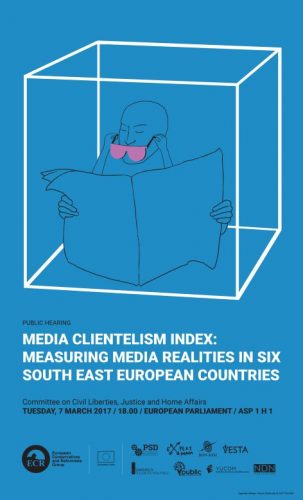 The media represent the backbone of democracy; among other tasks, they should operate in a democratic system as independent ‘watchdogs’, or external control mechanisms of the system and society as a whole. In addition, media freedom and media pluralism, with the presence of large numbers of well-informed citizens, may have a great influence on the effective control of corruption.1 In highly corrupt societies, disabling the media from carrying out these functions is one of the ultimate goals of political and social elites. Hallin suggests that one of the most important ways in which clientelism affects the media is through instrumentalisation, i.e. the process whereby media owners and financers place the media under their own control in order to achieve their own vested interests.
Having this in mind, the media clientelism index analyses the key characteristics of formal and informal mechanisms which should in practice ensure that universal norms and principles are respected in relationships between politicians, economic operators, the media, and citizens. The reason why we rely on a theoretical framework to regulate corruption in analysing social systems surrounding the media lies in the fact that clientelism and the phenomenon of corruption share an essential characteristic – the indirect exchange of material and personal favours. But, the focal point in this analysis is not just clientelist practice, but the barriers, i.e. the formal and technical restraints which each society has set for itself in relation to clientelist practice. As a rule, a lower level or quality of restraining clientelist practice, means a higher risk of clientelism, with a negative effect on the functioning of the media. An increased risk of media clientelism (weak, ineffective deterrents to clientelist practice) consequently leads to a high risk of deviation in democratic processes, which may have extremely harmful, sometimes radical effects on society, the quality of democracy, and life in general. Finally, the media clientelism index should be seen as a control mechanism which monitors the media environment and relations between politics, economic centres of power, the media and citizens, warning of the risks or identifying practices which may lead to the subjugation of society, public interest and public goods by narrow circles of power, that is, clienteles.

Media clientelism index has been developed within the framework of the project Civil Response to Clientelism in Media – MEDIA CIRCLE, implemented by Partnership for Social Development (Croatia) and financed from the Instrument for Pre-accession Assistance by the European Union (IPA) Civil Society Facility (CSF). Partners from five countries of Southeastern Europe are: Expert Forum (Romania), Vesta and Association of BH Journalists (Bosnia and Herzegovina), Public Policy Institute (Montenegro), Association for research, communications and development “Public” („the former Yugoslav Republic of Macedonia“), YUCOM Lawyers’ Committee for Human Rights and Independent Journalists’ of Vojvodina (Serbia).