Watch the recording of the release conference:

In 2021, party revenues and expenditures naturally declined from 2019 and 2020, which were election years. In 2021 a total of 29 million lei were collected from membership fees, while subsidies remain the main source of income for political parties. The highest revenues were reported by PSD, i.e. 91 millions, while revenues from membership fees represent 10% of the total funds received by the party in 2021. The parties that receive subsidies put money aside, registering significant advance revenues. For Pro Romania revenues decreased almost 10 times compared to 2020, and for Popular Movement Party (PMP) 12 times. 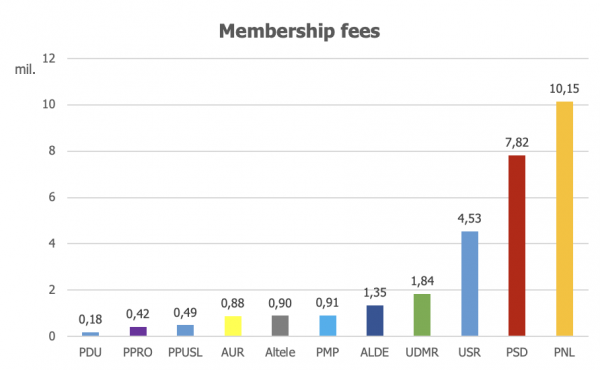 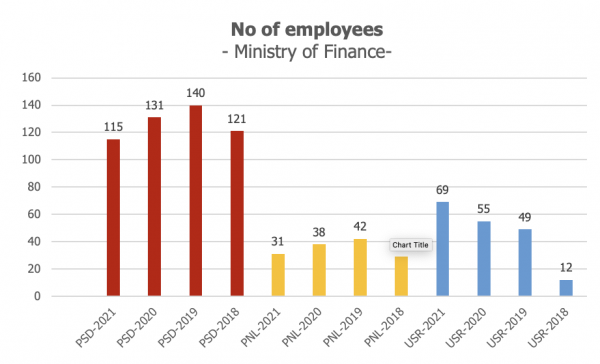 More parties published the mandatory information regarding income in the Official Gazette compared to previous years, reaching 55. Some parties also published after the legal deadline, the most recent report being from May 27, 2022, although the deadline is April 30.

Although there are regulations regarding the data to be reported, including report templates, the format in which the information is published on the official PEA webpage remains diverse. For some parties EFOR found the fully detailed income and expenditure report, and for others only a summary. In the case of reports published in the Official Gazette there are also certain differences related to the degree of detail. Some files are not found on PEA’s official platform, www.finantarepartide.ro, and other information, such as Annex 16 (detailed RVC) is rarely found in editable format.

Although the situation of data published in editable formats has improved in recent years, it still remains an issue for which further efforts should be made. We recall that Expert Forum proposed a commitment to increase the number of data sets under the framework of the Open Governance Partnership, which was not accepted by the PEA.

The situation of political parties

The Prosecutor’s Office attached to the Bucharest Tribunal requested, starting with the end of 2021, the dissolution of a number of 16 parties. For two of them, the court has already decided to dissolve. Although we cannot fully understand the reasons from the available public data, in one of the cases the reason was the lack of  candidacies in the last two elections. The reasons for which the dissolution procedure can be initiated in the conditions of lack of candidacies is disproportionate and can affect the electoral competition. Even if political parties should have a vocation to participate in electoral processes, the limits imposed by the legislator are problematic. Moreover, the legislative system is designed to favor large parties and ensure their success in elections.

The fines imposed by the PEA on political parties as a result of oversight have increased. The most frequent fines, for 2021, reached the amount of 50,000 lei, respectively 15,000 lei, and the highest fines were applied to the National Force Party (80,000 lei), followed by 65,000 lei each for PNL and PNTCD. A total of 111 parties have been sanctioned for irregularities related to the submission of the RVC, a situation that reflects a continuation of the lack of activity from previous years and which indicates a lack of discipline and / or capacity within the new political parties to report data. PSD, USR, ALDE and PNL have violated the legal provisions that prohibit the use of income from subsidies for purposes other than those established by law, but we do not have information about the nature of these violations.

The legislation on the functioning of the PEA has been amended to allow the occupation of executive and management positions not only through competition and examination, but also through the appointment and modification of service or employment relationships (delegation, transfer, etc.). The amendment was made in a non-transparent manner, by adding this regulation to a law approving an emergency ordinance amending the Administrative Code. This change continues other amendments from the last two, some of which have been criticized by the Court of Auditors. At the time of publication of this report, the regulation on the organization and functioning of the PEA was in the parliamentary circuit.

Although the number of documents published in editable formats has increased in recent years, and they are available on the www.finantarepartide.ro portal, their number could increase and the quality could improve. The PEA refused, citing a lack of resources, to adopt a commitment proposed by the Expert Forum in the Open Government Partnership, which aimed to open more data sets, especially in the context of the upcoming 2024 elections. Although the PEA initiated the development of applications for electronic reporting by political parties, they are not accessible to the public, and some of the information, such as monthly subsidy reports, is still published in scanned pdf format.

EFOR requested from the PEA based on Law 544/2001 (FOIA legislation) the full control reports for PSD, PNL, UDMR, ALDE, Plus, PER, AUR, PMP and Pro Romania resulting from the controls performed in 2021, but the PEA refused motivating that only the summaries of the reports are public information, which we consider to be contrary to legal regulations. Last year, the PEA also refused to provide this information, justifying its refusal, including for reasons related to personal data. We consider that the summaries published in the Official Gazette do not include enough details to understand the problems identified by the PEA in the functioning of political parties, and the refusal to provide these documents is evidence of a lack of transparency at the institutional level. Moreover, the diversity of replies provided by the PEA to the same request show that in fact the institution refuses to provide the information. 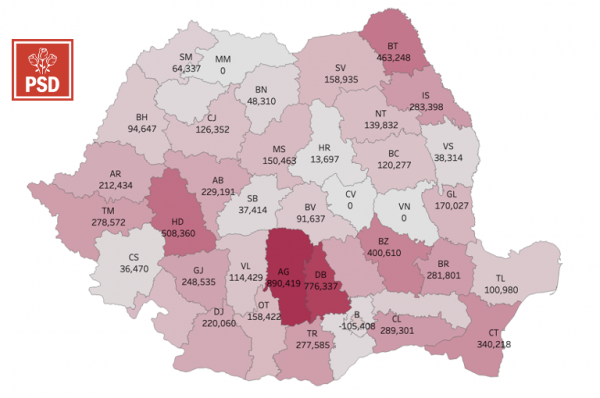 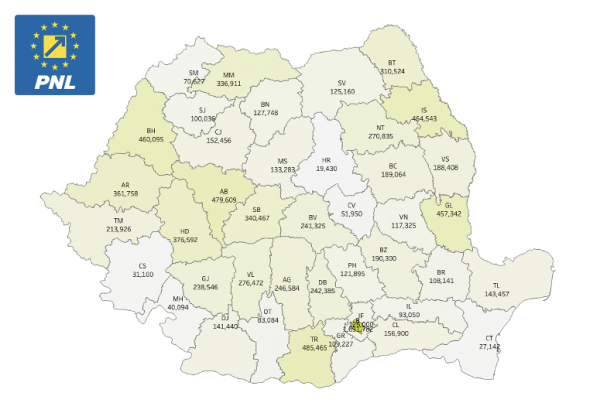 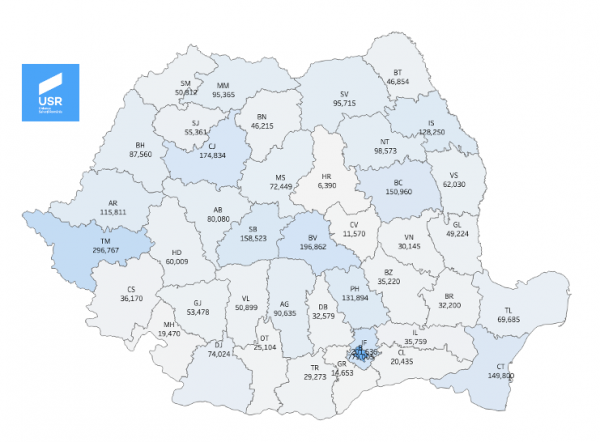 The amounts paid for contributions are diverse and differ depending on the person’s status, and the branches of political parties, which are responsible for raising funds, have very different success rates. In 2021, the PSD Vrancea, Maramureș and Covasna branches did not register any membership fees. At PMP 13 branches did not register any fee, while at Pro Romania the number rose to 25 branches.

In most cases, it is possible that political parties do not insist too much on ordinary members without positions, but rather on those with leadership positions, who can contribute larger sums. The sums paid by party members are not public, and the decisions of the decision-making fora of political parties are not available either. The amounts can range from 1 leu to PSD, 3 lei to PNL, 5 lei to USR for casual members and can go up to 100 lei for PSD Argeș local councilors, 250 lei for the president of the county council at PNL Mureș or 1000 lei for national parliamentarians and 3000 lei per month for USR MEPs. In most cases, the branches have a freedom to set amounts depending on the limits decided by the center, and each county has a different typology when it comes to amounts and how to collect them. If at PNL Brașov the most frequent contributions are 5 and 10 lei, at Teleorman they are 600 -1200 lei; the most frequent fee is 30 lei.

At PNL, the lowest fee was one leu, and the highest was 56,250 lei, paid by the former president of the party, Florin Cîțu. George Simion, the president of AUR, paid 540 lei, although there are many more members who paid up to ten times more than him. The names of Eugen Tomac or Cristian Diaconescu are not found in the list of contributions from PMP, and the name of Victor Ponta was not identified in the list published by Pro Romania.

If we refer to all the contributions from 2006 until now, the most prolific was the MEP Maria Grapini, who contributed 201 thousand lei to PC and PPUSL. This is followed by the PSD MEP Ioan Mircea Pascu, with 163 thousand lei and by Maricel Popa, PSD senator and president of the Iași county council. The highest dues were generally paid by MEPs and members of parliament and party presidents are rarely the most generous. These figures may illustrate that parties expect leading members to bring money to the party because they have been proposed in such a position by the party.

The number of party members is not known in Romania, and no data is published in this regard. From the existing data we noticed that at PMP 1666 unique people contributed, at PNL almost 30,479, at Pro Romania 663, and at AUR 6363. However, it is not an exact indicator of the number of members, especially since the political parties do not necessarily efforts or do not have the ability to collect dues from each member, and interest increases during the election period or when there are debts. 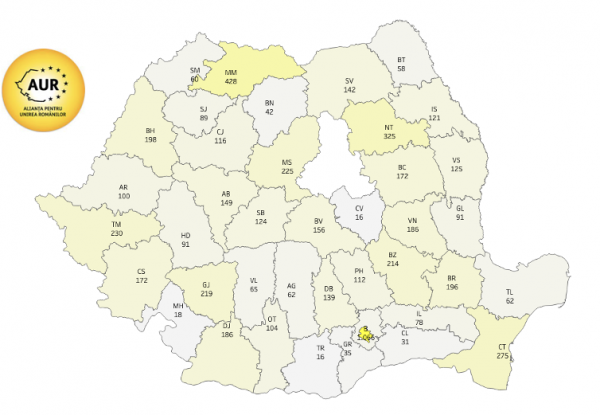 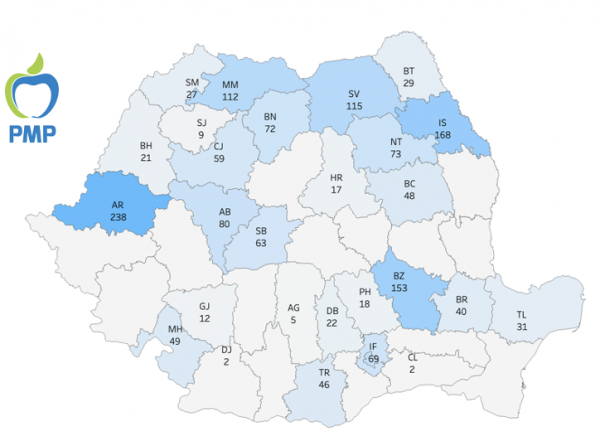 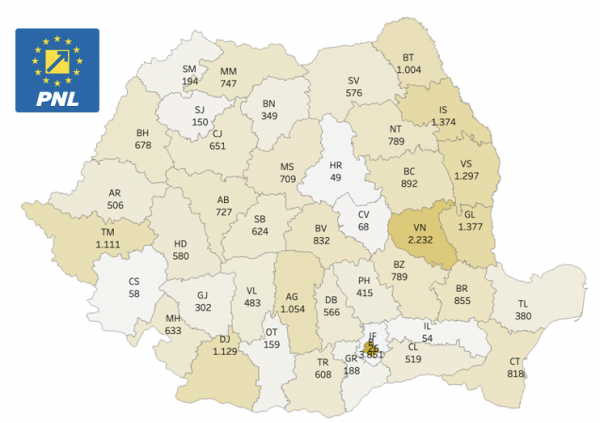 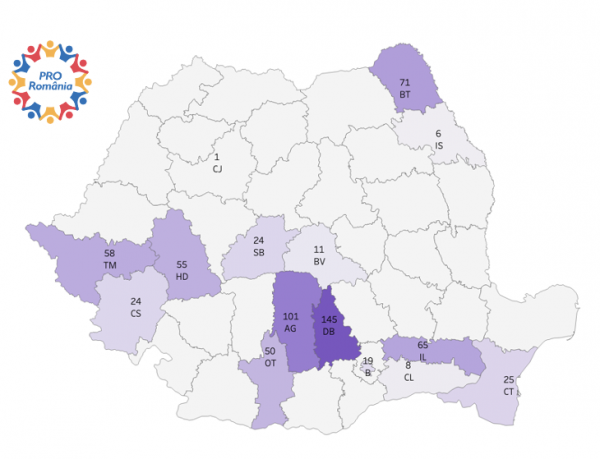 Political parties continued to receive significant amounts of grants, which remain the main source of funding. In 2021, political parties received 243 million lei, and since the beginning of 2022, for the first six months, 124 million lei have been transferred. Last year, the highest percentages of public money were spent in 2021 for press and propaganda (56% – 62 million lei), staff (16% – 18 million lei), rents / utilities offices, political consulting, activities with political character (4% each) and opinion polls (3%). 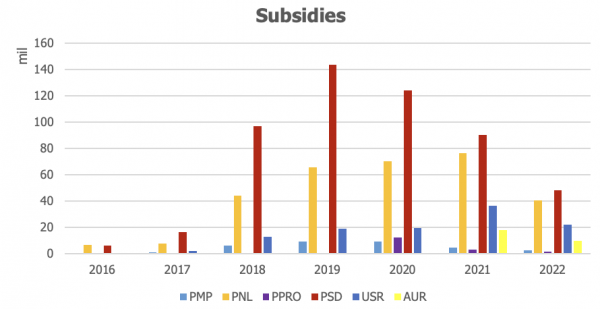 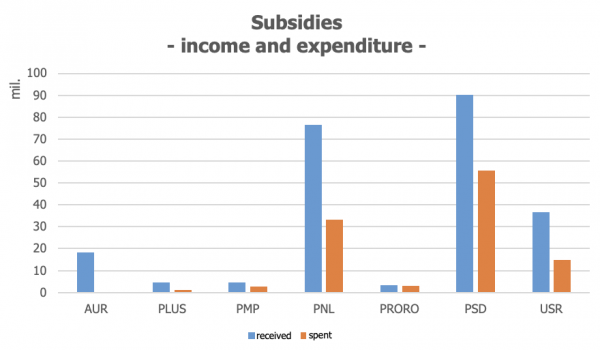 Last year, the highest percentages of public money were spent in 2021 for press and propaganda (56% – 62 million lei), staff (16% – 18 million lei), rents / utilities offices, political consulting, activities with political character (4% each) and opinion polls (3%). PSD spent 71% of the money on the press, PNL 64% and USR 7%. In 2022, PSD allocated the largest percentage of the amounts spent on press and propaganda, namely 74%, PNL a percentage of 78%, USR 7%. In comparison, the expenses for propaganda increased significantly, from 14 million lei in the first four months of 2021 to 30 million lei in the first four months of 2022. At PSD the expenses doubled, from 8 to 17 million, and at PNL increased from 5 to 11 million. At USR, the amounts allocated for advertising have also doubled, even if they remain relatively low compared to the other two parties.

For staff, in 2021, PSD spent 12% of party funds obtained from subsidies, and PNL 7%. USR allocated the most for staff in proportion to the subsidies spent: 45%. Pro Romania allocated a quarter of the subsidy money spent.

A significant problem remains the purchase of advertising in the media in a non-transparent way. The PEA publishes only statistics on categories related to spending money, but not information related to contracts and does not check them if the party does not transmits them at its own initiative. The big parties, but especially PSD, have constantly refused to publish these contracts, despite the insistence of some civic organizations. The Center for Public Innovation sued several parties who refused to provide this information. The only party that publishes on its own initiative the list of expenditure contracts at the level of the General Secretariat remains USR. For other parties we can partially find out the information from the income and expenditure reports, but with a delay of one year, but not for PSD, which spends the most money. 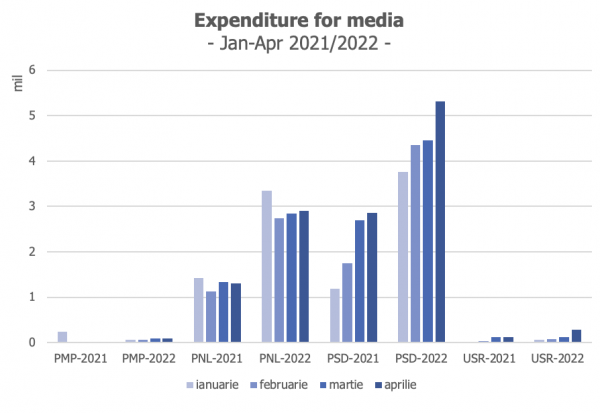 In 2021 there were several decisions taken that determined the arbitrary change of the rules for allocating funds, by increasing the annual amount secretly by the Government, but also by trying to grant PPUSL funds, although the party would not have the right to receive. Arbitrary modification of the rules according to which money is allocated remains a problem that generates instability and allows political actors who do not meet the necessary conditions to obtain public money.

Report published within the Effective Combat Against Corruption (ECAC) project funded by the Bureau of International Narcotics and Law Enforcement Affairs (INL), implemented by the Expert Forum in partnership with the International Foundation for Electoral Systems (IFES) and CEELI Institute.