The 2020 local elections will not change much in terms of women political participation in Romania. The differences from the last round of local elections, in June 2016, are minimal, although upstart parties have joined the competition recently.

There has been unexpected regress at the institutional level: the electoral authorities publish today less data than they did in 2016. For example, among the missing info now are the date of birth and the gender of candidates, which are important to determine whether a person meets the legal age threshold (23), or if political parties follow the good practices of gender balancing the electoral lists. Such data must be collected and published according to the international agreements Romania has signed.

In 2016, out of 267,242 local candidates (county/judeţ and local/municipality level, combined) only 57,149 (21.38%) were women. In 2020, as indicated, this official information is missing. We had to come up with an algorithm and comb the list of the 256,038 candidates registered for the county and local offices (all four of the elective offices open for competition on Sep 27th) in order to find out how many women are actually taking part. The method may give some errors, but we estimate that they are negligible. In all cases, it is the only way to make up for the lack of interest and transparency in this respect of the institutions managing the electoral process (electoral offices, the Permanent Electoral Authority).  The database we built can be found, together with the text of this report, on the following webpage: www.expertforum.ro/women-local-elections 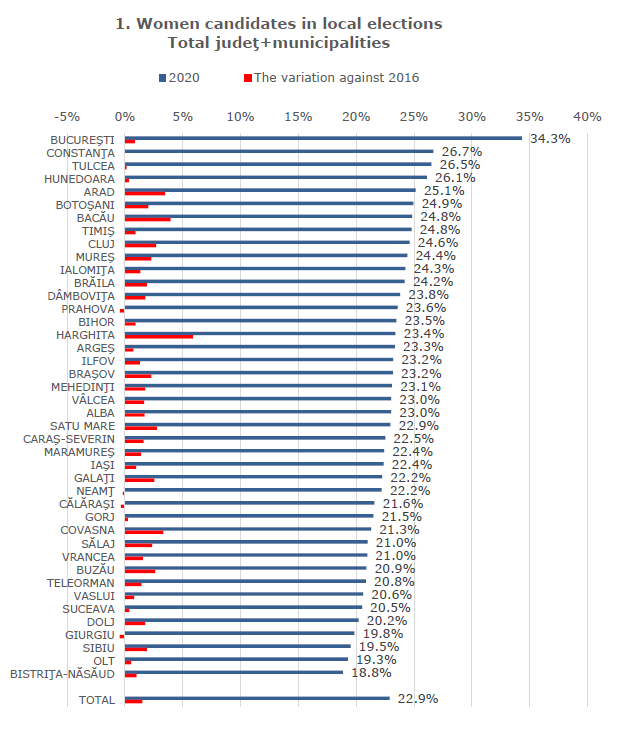 In brief, the situation has not changed significantly over the last four years in terms of party policy on gender balance. Women remain under-represented among the candidates in local elections, especially when it comes to positions with true executive power. There are situations, as in the case of the lists for County Councils, where the percentages seem in order overall, but in fact most women are not in eligible positions. The equality of chances in Romanian elections and politics in general remains “work in progress”, as it were.