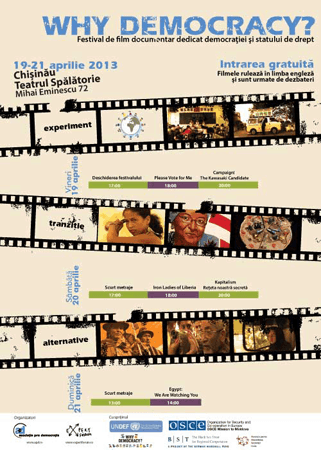 What connection can there be between a student from China who runs for class monitor, the role of new media in the expansion of riots in Egypt, the transition from pre-1989 Romanian economy to market or the election of a female president in Liberia? Apparently none. However, each case answers the question What is democracy and why we need democracy?

The Film Festival Why Democracy? raises questions and generates critical discussion on the principles of democracy, analyzing the challenges that different types of regimes face today. The festival brings to public attention 17 documentaries and short films designed more than 200 countries and territories, reaching an audience of over 300 million people and generating much debate around the world. The films in the festival are part of a larger international project and are made by independent filmmakers awarded at renowned film festivals. We added to these also the successful documentary by the Romanian director Alexandru Solomon, Kapitalism. Our secret recipe.

Topics covered by the documentaries are very diverse: the democratic election of the leader of a school class in Communist China, gender equality and political reform in Liberia, the Blitz-campaign of a candidate for local government in Japan or the original transition from communism to Romania market economy. The story in each movie takes place in a different country: United Kingdom, China, Croatia, Cuba, Democratic Republic of Congo, Egypt, Iran, Italy, Kenya, Liberia, Pakistan, Russia, South Africa and Romania.

Each documentary lasts about an hour and is followed by a brief discussion moderated by experts in the subject of the movie.

Description of the documentaries
April 19 – Experiment

Please Vote for Me – A democracy experiment in China: democratic elections are organized in a primary school.

Campaign! The Kawasaki Candidate  – The one-week campaign of a candidate to a local office in Japan, supported by the government party

Iron Ladies of Liberia – After almost two decades of civil war, in 2006, Liberia has the first official freely elected, who is also the first female head of state in Africa.

Egypt: We Are Watching You – If the first democratic elections of Egypt, after 24 years, are shadowed by grave accusations of fraud and numerous violences, how legitimate is the new regime?

View the presentation and festival brochure.

Entry is free. The films are projected in English and have no Romanian subtitles. Location capacity is 70 seats.