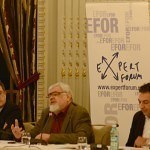 Sometimes I’m fed up myself of jeremiad’s sub tone many of the articles I publish have. I have, it’s true, enough reasons to be moody, to be more and more skeptical when I try to envision solutions. I wish I could come up with strong solutions, favorable circumstances, encouraging achievements. But they are either very few and fragile, or my sight is clouded with distrust, I don’t really find them. Lately, I had, still, the opportunity to attend an event that leaves and makes room for hope. I hasten to record it, before I relapse into the usual melancholy. The event that I mentioned was a conference occasioned by the annual rapport of an association of public policy and good governance specialists (EFOR, „Expert Forum”). The conference took place Thursday, 6th February, before a large and interested public, comprised of publicists, businesspersons, politicians, analysts on different areas, representatives of civil society, of syndical movements etc.

I won’t go into detail about the substance of the said conference, organized around a very hot topic lately: „THE ERRORS OF 2013 AND THE COSTS OF NON-WEST”. What impressed me – and became my reason to hope – was, most of all, the general atmosphere of the debates and the portrait of a few EFOR members that launched and maintained the dialogue. I’ve known Sorin Ioniţa for a long time. I’ve always appreciated his education, his realism and analytical efficiency. Firm, without being stiff, applied, avoiding to be abstruse, corrosive, when the situation demands it but always within the limits of cordiality, Sorin Ioniţa always confirmed my expectations. I’ve met Laura Ştefan, many times, as a dialogue partner in many televised debates. I enjoyed to always discover in her a young professional, competent, self-assured, devoid of stubbornness, confident in her words, lacking any trace of self-importance or authoritative abuse. I know less of Ana Otilia Nuţu, but I remember she made me better understand the Romanian infrastructure challenges, through her two articles published in Dilema Veche, focusing on railroads. It is important that, at last Thursday’s conference, we had before us a team of experts of a kind we think nonexistent, but who works, still, for public good, discretely, competently, unbiased. They work and they do a good job, only through their presence they promise an encouraging new perspective. EFOR is collaborating with European Comissing, World Bank and Council of Europe, United Nations Development Programme. Sorin Ioniţa is a member in European Economic and Social Committee (a consultative organism of EU). Laura Ştefan is part of a 17 members commission on anti-corruption and transparency issues. Ana Otilia Nuţu is a consultant at World Bank. Graduates -or MA – of prestigious universities (Cambridge, Central European University or – as in Suzana’s Dobre case, executive director of EFOR – London School of Economics), these researchers, young and dedicated are mostly used by international institutions. Romania’s Government, or the opposition show no signs of needing them or asking for their council, to use their intelligence and expertise. The political scene is saturated, instead by inept shameless dilettantes, petty profiteers, accustomed at sapping public administration. They don’t need council, but „tips”, they need no clearness, but their own vanity fumes. Public offices are only opportunities to further their personal interests, money making instruments. EFOR „category” is, at best, used to season some talk-shows with only journalistic impact, or to decipher technicalities of good or bad governance to the large public. It’s still something! But I want to see people, like the ones mentioned above, not only simple commentators from the sidelines but in a position of power, or very close to it. I don’t fool myself that it will happen soon. But it helps me to know that, if need be, these people exist and, surely, they are not the only ones of their kind in Romania. The fact that these people exists leaves room for hope. And they add to my bad disposition a pale shade of pink.