Big-data techniques to detect and prevent misconduct in public procurement, in real time. This is the aim of SceMaps, which performs a risk assessment based on a vast volume of data it uses to calculate and analyse 17 red flags – risk indicators – that highlight potential irregularities. EU countries spend 14% of their GDP, or around 2 trillion euros, on public procurement each year. A manual analysis of all tenders is impossible. But an automated, real-time risk assessment of the thousands of public contracts awarded every day in Europe makes it easier to prevent corruption and conflicts of interest in public procurement. The SceMaps analytics platform, designed with this objective in mind, is being piloted in Bulgaria, Italy, Romania and Spain and focuses on three highly sensitive sectors: Construction, Wholesale of Fuels and Wholesale of Pharmaceutical Products.

One of the red flags revealed by SceMaps is the procurement exposure per employee ratio, which calculates the average amount of tenders awarded per employee over a given period and ranks companies accordingly. A higher rank means that the company has a lower number of employees compared to its peers with similar revenues from public tenders. The picture below presents only the companies ranking in the highest 20% of the ranking scale; in the case of Italy there are no companies in this group. This red flag represents the risk of companies with an insufficient number of employees winning tenders that require a larger workforce and, in many cases, this is combined with the undeclared – and therefore illegal – use of subcontractors. 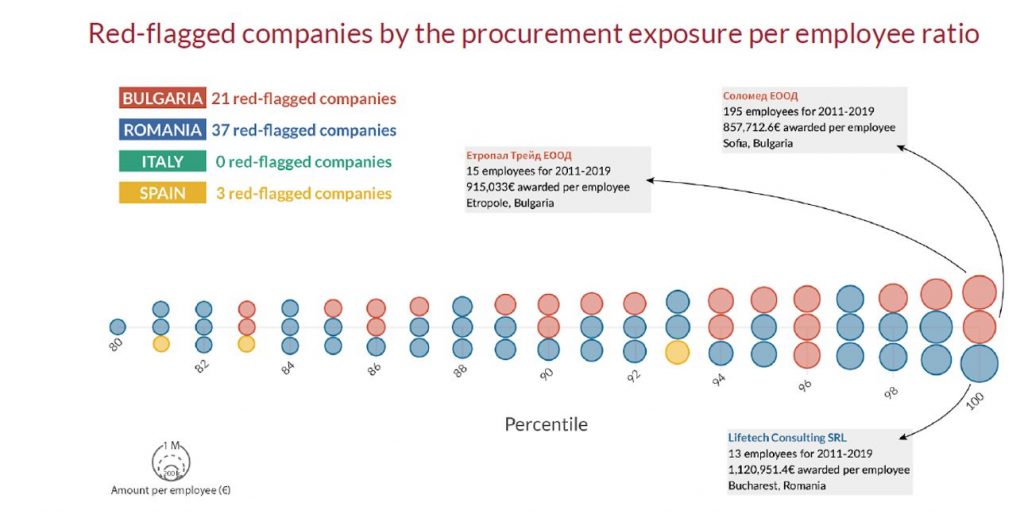 Up to 37 companies in Romania and 21 in Bulgaria raise this red flag in a 10-year analysis period for all three sectors. Shorter periods raise more alarms, but a longer period, while reducing sensitivity, allows for the identification of companies with continued suspicious behaviour in the long term.

A company’s revenue per employee ratio is one indicator of business efficiency. However, when this is too high compared to the peer group of companies, it may also indicate misconduct, especially when revenue is generated from public tenders, where the rules of the free competitive market driven by supply and demand are replaced by administrative rules of checks and balances.

Another red flag is the procurement exposure to revenue ratio. This calculates the share of revenue from awarded public tenders in the company’s total revenue over a given period. It represents the risk of some companies depending on public procurement for their survival, meaning they are thus more likely to use illegal means to gain an advantage over their competitors. It may also point to companies that do not operate in the free market and therefore cannot demonstrate viability without the support of public money.

Thanks to this ratio, we can reveal that companies in Romania and Bulgaria that obtained more than 80% of their total revenue from public tenders for the period 2010-2019, received EUR 2.85 billion in total of awarded contracts (respectively EUR 853 million in Bulgaria and EUR 1.997 billion in Romania), according to data collected by SceMaps. These sums represent about 3% of the total amount awarded in the economic sectors mentioned above.

Risk assessment of suspicious behaviour related to corruption in public procurement could be used by independent experts, regulatory and control institutions, investigative journalists and law enforcement authorities. The SceMaps initiative demonstrates how big data can be used for both the analysis and investigation of existing cases of suspicious behaviour and for the design of preventive measures and real-time controls in the tendering process. While civil society and the media play an important role in the first case, competent public authorities and, above all, an independent and strong judiciary and prosecution service, are vital for the implementation of risk assessment results in practice.

Project funded by the European Union’s Internal Security Fund – Police. The content of this website represents the views of the SceMaps project partners only and is their sole responsibility. The European Commission does not accept any responsibility for use that may be made of the information it contains.