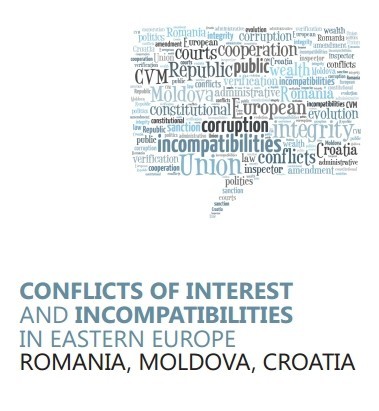 UPDATE: EFOR organized a debate about conflicts of interests and incompatibilities, legal issues and practical difficulties and instruments for increasing the degree of public integrity in together with Horia Georgescu, President, National Integrity Agency, Andrei Chiliman, Mayor of the First District, Bucharest, Dan Darabont, Vicemayor of Bucharest, Cornel Călinescu, Director, Ministry of Justice, representatives of public institutions and embassies, civil society and unions. The conclusions show that there is a need for legal clarifications, elimination of legal overlapping, but also to ensure the stability of existing legislation (although it needs modernization and adaptation to the needs of the current needs of society and public administration). Also, there is a need for prevention and information campaigns for the public administration and the consolidation of the institutions that have the role of assuring the public integrity that are continuously subject to political pressures.

You can find the two EFOR reports that scrutinize the way anticorruption efforts developed and work, but also a comparison with Republic of Moldova and Croatia. Also, we explain why the institutions that ensure public integrity are so unpopular within the political circles, what pressures are put on the system and what are the factors that influence the development of the institutional and legislative framework.

Conflicts of interest and incompatibilities in Eastern Europe. Romania, Croatia, Moldova (EN only)

How did the Romanian anticorruption system evolve and what role did the conflicts of interests, incompatibilities and wealth declaration had in this process? What was the reaction of the political parties and their position towards the anticorruption institutions? What was the role of the European partners in creating the legislative and institutional framework, since the ‘90s until nowadays?

EFOR will release a debate on public integrity in the Romanian space, looking from the perspective of conflicts of interests, incompatibilities and wealth control and we debate the legal and institutional framework that ensures prevention, control and sanctions. The research is part of a more complex study that also covers Republic of Moldova and Croatia and that was also released in Brussels and the other two countries.

The event is part of a project financed by the UK Embassy and British Council.